Home » Software, Tools & Trends » Defining “Software-Defined Everything”: SDx Is Not As Radical As You May Think 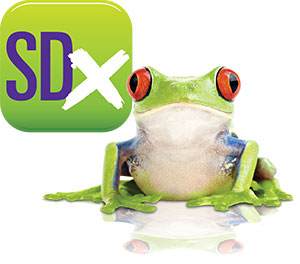 Defining “Software-Defined Everything”: SDx Is Not As Radical As You May Think

Don’t let the lingo frustrate you — the lingo can be more difficult than the concept. Here’s a quick primer on defining software-defined everything, how it’s making fancy hardware obsolete, and why it’s like watching a movie at home (really):

What it means to be software-defined

When something is software-defined it means that the function is being performed by software or automation rather than by hardware. This changes the way IT can work because IT functionality is no longer physically constrained. All of the pieces of information required for a function no longer have to be located on the same physical component and, in fact, can be spread out among hundreds or thousands of components anywhere in the world. Software brings the pieces together to complete the required IT function.

For two decades, technology has been moving in this software-defined everything (SDx) direction.

A good analogy for the IT hardware-to-software evolution is the evolution of watching a movie at home.

You used to have something physical that you owned — a VHS tape. This evolved into digital copy that you stored on hardware you owned — your Tivo or DVR. Then this evolved into a digital copy that’s stored in the cloud that you access through an app — Netflix, Hulu or any other media streaming app. Now you don’t own the physical movie or have a copy on your hard drive anymore. Instead, you have a subscription. Or you buy the movie online and store it online, too. Why own VCRs, DVDs, DVRs or any of that equipment when you have software that can stream it whenever you want? You don’t even need a TV anymore. You can watch it on your tablet or smartphone.

To take the analogy further, think about the different scenes in a movie. Since the software is doing all the work, each scene doesn’t need to be stored in the same place. The software can access all of the scenes from wherever they’re stored and piece them together in the right order, playing the movie seamlessly as if it were physically located on a tape or hard drive in your living room.

In the case of business operations, SDx delivers seamless functionality as if all the work was happening right there in your data center. Which begs the question about whether you need a data center anymore.

How the hype gets ahead of reality

Have you seen these terms used? Or maybe overused?

Some IT professionals use the term software-defined in the same way they use the word cloud — too often. While it’s definitely a growing trend and for very valid reasons, overuse of the terminology creates confusion. The reality is that organizations aren’t going to completely transition to SDx overnight. Each will move to software-defined functionality as it becomes appropriate for their unique organization.

For now, it’s most useful to focus on the first three software-defined terms above because they are the foundation of virtualization and hyperconverged infrastructure.

● Software-defined computing (SDC) is the concept of all IT delivered as a service that began more than a decade ago. Though virtualization that allows the same piece of hardware to run multiple operating systems, the software takes over. Service is delivered through APIs and other pathways, removing the hard-wired hardware from the computing functions.

● Software-defined storage (SDS) is storage infrastructure that’s spread across a wide range of servers and managed by intelligent software. The focus is on the service rather than the physical servers, which allows for greater flexibility, efficiency and cost savings.

Simply put, when you hear someone talk about something that’s software-defined, think of it as something without physically dedicated assets.

SDx transforms assets into commodities that are practically disposable

Back when you (or your parents) were watching VHS tapes, IT techs were designing systems using physical components. The components were heavy and made of metal, and they had plugs, lights and interfaces the techs needed to understand so they could connect everything and make it all work together. Later, the arrays of servers in converged infrastructure to hyper-converged infrastructure environments were sights to behold — rack after rack of expensive high-quality components that needed to be carefully maintained and repaired if something wasn’t right.

With software running the show, servers no longer have to keep getting better and faster to do their job — better and faster servers don’t do a thing to improve SDx computing. Instead, they can become dumber, and therefore cheaper, because the work has been divided up among thousands of other work points. Once a server stops performing up to par, it’s simply replaced and sent for recycling.

It’s the software that needs to be high quality.

At Leapfrog, we see SDx as an evolutionary curve just like the evolution to watching movies on Netflix. You achieve the same goal, you just get there a different way. After a couple dozen years of IT advancement, your business can now work in ways that are more flexible and dynamic, and that free you from having to own and maintain physical equipment. Most of our clients currently use both traditional and software-defined IT, running their operations on some dedicated infrastructure and some shared infrastructure. Coexistence is what makes the most sense for most companies right now.

As a follow-up to defining software-defined everything, next month we’ll take a look at ways organizations are using it most effectively and the implications for security. If you’re interested in learning more about SDx and how it can impact the way you do business, please feel free to contact us.