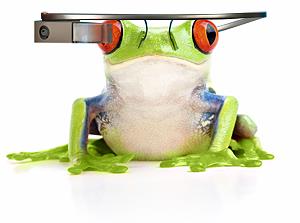 July 2013:  While the digital world is leaping from computers to mobile, we’re also leaping from mobile to – wearable! Google Glass, the new hands-free computer headset, is the talk of tech town — and might, like the iPhone in 2007, be the Next Big Thing. Here’s a preview, plus a few other wearable marvels that collect data and (research says) make you feel smarter, too:
You wear Glass like a pair of glasses, but there are no lenses. Instead, there’s a teeny monitor that sits off to the side of your right eye, a camera next to that, and a touch pad at your right temple. You use your voice, or the touch pad and head tilts, to enter commands. You say things like, “OK Glass, record a video” or “OK Glass, Google photos of tree frogs.”

Reactions have been a combination of “sweet!” and “uh-oh!” Sweet because you can keep your smartphone in your pocket (Glass pairs with it) and your eyes straight ahead. And your reaction time from translating a thought into data you can record, store and send? Almost instant. Talk about productive!

On the other hand, “uh-ohs” abound because of privacy and safety issues.

Some US state legislators are trying to make it illegal to wear Glass while driving, Las Vegas casinos are already banning it, movie theaters are worrying about live streaming, and schools and other places with locker rooms are reviewing their policies. Many believe these concerns are just a normal reaction to new technology, and some Glass Explorers (beta testers) make comments like, “The screen really isn’t as distracting as one thinks either.”

Yet the backlash against face recognition software was so strong that Google has promised not to approve those apps. But apps that let you take a picture by winking instead of using a voice command are still on the table. So there will be lots of excitement and learning curves ahead. And parodies!

But will we actually get more done?

Hopping right, we will! Innovative and high-value uses in education, for example, are boundless. The technology can be used to teach complex skills, like surgery and airline mechanics. And for people working out in the field or traveling, real-time collaboration and language translation will remove barriers that used to slow them down. Google Glass will leap onto the consumer market later this year for $300-$500.

What other wearable tech gadgets are getting attention? For fitness and health-tracking, check out RunKeeper, Jawbone Up and the popular Nike FitBit line that’s being used in company wellness programs. For photography or lifelogging, try Memoto and Autographer. Hovding is an airbag helmet for bikers that nests in a neckband and inflates when needed, and Sony SmartWatch pairs with your Android phone to give you an ongoing ticker of email, text, social media and calendar notifications — to navigate, just flick or tap.

PrevPrevious3 Ways That Monitoring IT Anomalies Can Keep Your Company Safe
NextHow To Stop Stores From Tracking Your Every Move While You Shop … Or Make It Pay Off!Next