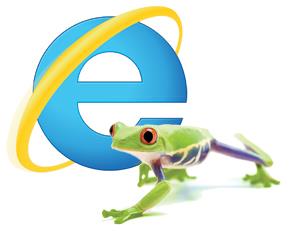 Internet Explorer 9 is Here! What’s New, What’s Better and Will It Run On Your Operating System?

If you use Internet Explorer (IE) and think it’s a bit clunky, you’ve clearly not updated to the newly released IE9 — so hop to it!

Leapfrog Labs recommends that users running Windows 7 and Vista update to IE9 now so you can take advantage of new features that will make your online life easier (sorry, XP users, this upgrade is not for you).

IE9 beat Firefox 4, Opera and the new Google Chrome 10 in many tests (but not all), thanks to a new JavaScript engine and “hardware-accelerated text, video and graphics.” By using your computer’s own graphic processing unit, IE9 boosts processing speeds. This new technology is important because websites are using more complex graphics, videos are still gaining in popularity and cloud-based software is hot-hot-hot.

IE9 comes in 32bit and 64bit versions, but if you have a 64bit computer it won’t run the 64bit version as the default — you need to select it manually. Not that you’d want to: the 64bit did poorly in speed tests.

Reviewers point to a few other quirks but the upgrade has been met with rave reviews. Visit the Microsoft page for complete feature details and downloads. Meanwhile, here are nine things to love about IE9:

1. More room for webpages since the interface has been trimmed down considerably — it’s nice and sleek

2. More compliant with HTML 5, which is geek-speak for saying websites using the latest development standards will run much better on IE9 than on earlier versions

3. At least one major security improvement (against cross-site scripting attacks, an IE7 vulnerability)

4. Includes “Do Not Track” and Tracking Protection features (although these are not foolproof)

5. Protection from malware for your Download Manager (also not foolproof)

6. Its address bar does double-duty as the search box (like Chrome)

7. Thumbnails of frequently visited pages appear each time you open a new tab

8. Snap feature shows you two sites or pages on one screen

9. Jump Lists, Thumbnail Preview Controls and Pinned Sites (one-click access to your favorite sites from the Windows task bar) all integrate with Windows 7