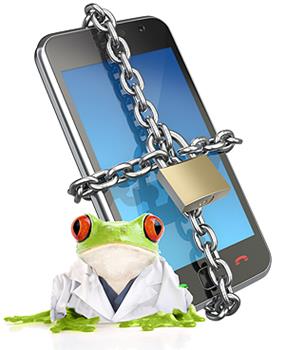 3 Killer Apps That Defend Your Smartphone Against Nasty Malware, Phishing and Apps That Spy

November 2013: Got a smartphone attached to your hand? Then you need anti-malware!

That lovely little computer is so handy and helpful that it’s easy to forget it’s also a portal into your most sensitive information. Many cybercrooks spend all their waking hours figuring out how to get at people’s data so you need to spend a few minutes thwarting them.

Leap into smartphone security! Here are three of our favorite apps:

Malwarebytes Anti-Malware Mobile: Android, Free
Just launched, this app is from one of the world’s top anti-malware companies. It detects and removes malware, scans your device regularly and suggests steps to close any security holes it finds. It also lets you grant privileges by category (contacts, SMS and identity information, for example) and “whitelist” legitimate apps to speed up the scanning process. The video has details and fun animation.

Bitdefender Mobile Security: Android, $9.95/year
Bitdefender earns top honors for its comprehensive suite of mobile armor. It combines anti-malware with anti-theft, and the latest version has a new privacy advisor that gives you detailed intel on what your apps are doing in your phone behind the scenes. Another nifty feature turns your lost phone into a microphone if it’s lost. Bitdefender also has a free app called Clueful for iOS and Android that offers the privacy advisor feature as a stand-alone.

VirusBarrier iOS 2013: iOS, $0.99
The reason there aren’t a lot of anti-malware apps out for iPhone and iPad is because those devices don’t get malware as long as you don’t jailbreak them. Apple’s policy of rigorously checking all apps before they’re allowed on App Store works. (To be fair, Google has booted a lot of infected apps off its app store, but since Android is open-source there will always be malware.) But — and this is important — iOS devices CAN have infected files on them from email attachments and remote locations like Dropbox that you can inadvertently upload to your computer or share to someone else. VirusBarrier finds those infected files before that can happen.

Apps like these are definitely the way to go for smart frogs.

And what else should you do to keep your smartphone healthy? Don’t let it get sick in the first place!

Here are our Seven Habits of Highly Effective Mobile Users:

1. Keep device firmware updated for the latest security patches
2. Always use passcodes
3. Turn off WiFi and Bluetooth when they’re not in use
4. Don’t allow apps permission to access other data (like Contacts, SMS and Calendar)
5. Turn off location-based services that you don’t need
6. Back up your device often

7. Make sure your device can be wiped remotely in case you lose it

PrevPreviousIs Your Old Smartphone Worth Some Money? Find Out – Fast!
NextDoes Your Company Need To Add Data Leak Protection? How To Decide In 4 StepsNext