Home » Software, Tools & Trends » Which Is Better For Business Use — iPhone X or Galaxy Note 8? 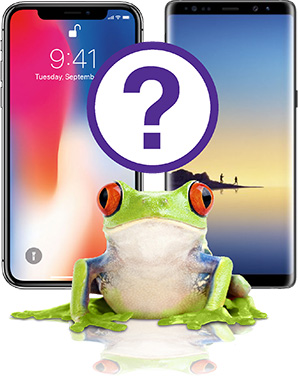 Which Is Better For Business Use — iPhone X or Galaxy Note 8?

December 2017: Smartphones keep getting better — lucky us! But which top-end model — the Apple iPhone X or Samsung Galaxy Note 8 — is best to use for business?

Both have features in common, including a full-screen design, waterproofing, wireless charging, and the same WiFi and Bluetooth technology, but they also have some important differences. Here’s a chart that lines up key features so you can see how each stacks up and why Leapfrog thinks one is the hands-down winner for business:

*Apple and Android use RAM differently.

When you look at these features (and others not listed), they appear pretty similar. So, it would seem that buying a smartphone is like buying a car — they do pretty much the same things, so get the one you like best. But the key difference isn’t evident in charts or most reviews because it’s systemic.

When it comes to protecting business data, Apple wins.

Leapfrog recommends iPhones over Android phones because Apple has a controlled ecosystem.

By controlling each piece of the ecosystem, Apple can control the threats that use smartphones as ports of entry.

These are the very same controls that open-source fans despise — they do not want controlled environments. They know what they’re doing and want to manage their devices themselves. It’s a different story for people who want to use their phone right out of the box — which is most of us.

Furthermore, by having always controlled the App Store, Apple has been solely responsible for validating the security of available iPhone apps. Apple’s app accountability keeps most malware out of iOS, while malware problems continue to plague Android phones despite improvements made in Google Play Store vetting. Recently 50 apps have infected approximately 21 million phones. People who use Android phones that aren’t managed by MDM (which describes a lot of phones in the BYOD universe) are responsible for keeping their own anti-malware up to date and staying vigilant about malware threats.

Managing updates centrally adds yet another security level to the iPhone ecosystem. iPhone users know when an operating system update is available because Apple sends a notification to the phone — there is only one responsible party. With Androids, there are many responsible parties for operating system updates, which can end up being like no responsible party at all. Service providers (Verizon, AT&T, T-Mobile, Sprint, etc.) are responsible for the customized Android operating system that they install on the phones, so they also decide when to push out the updates. Update timing can be advantageous or disadvantageous for their businesses so they push out updates accordingly. The older the phone, the more disadvantages in pushing out updates. They’d rather sell new phones than patch and update older phones.

Clearly, the disjointed nature of the Android universe puts smartphone security in the hands of Android users. For businesses, this is an inherent risk — people are busy and they make mistakes. One of Leapfrog’s key beliefs is to work with clients to strike the optimal balance between business productivity and security. So when it comes to smartphones with productivity parity, we recommend going with the one that’s inherently more secure. If you have questions about how your employees’ smartphones factor into your overall security posture, feel free to contact us.

PrevPreviousEmployee Experience Strategy: How Your IT Can Boost (or Sabotage) Morale, Retention and Customer Service
NextTop 7 Reasons To Prioritize Security Awareness TrainingNext