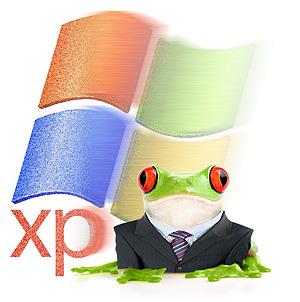 February 2014: If your business has computers that are running Windows XP — 29% of all Windows computers still do — then your company will soon be what us frogs call “Up Disruption Creek.”

Microsoft will officially stop supporting XP after April 8, 2014. No patches, no updates, no troubleshooting. Just specific anti-malware support. So hop on this advice and start paddling, quick! Here are six things you need to know about migration right now:

1. Understand that one of your most important business assets is your data
This means that the operating system (OS) you use to access and work with your data has to be secure, stable and reliable. While Windows XP is arguably the best OS Microsoft has ever made and you may be reluctant to see it go, it’s time to say goodbye. Any computer at your business that’s running XP needs to be replaced with one that has a supported operating system. Otherwise you’re flirting with disaster — your data is counting on you to manage it well!

2. Computers that came with XP probably won’t run Windows 7 or Windows 8 very well
It’s true that some computers currently running XP will also run a newer OS. Here are the requirements for Windows 8 and Windows 7 (released in 2012 and 2009, respectively – for context, Windows XP was released in 2001). But even if your computers can run a newer OS, it doesn’t mean they should. Expect problems when running new software on old hardware — performing a simple OS upgrade may not be worth your effort. Instead, look at a replacement strategy based on smart lifecycle planning.

4. There’s a significant learning curve when migrating to a new OS – except for Windows 7
Windows 7 is most similar to XP so if you don’t have the time or budget to train your staff, Windows 7 may be your best choice. Even though it’s already four years old and mainstream support will end in January 2015 (extended/security support will continue until 2020), you will buy yourself some time. With Windows 8, Linux or MAC, your team will need to spend some serious hours learning their way around the new OS.

5. Think outside the PC box by looking at virtual desktop infrastructure (VDI)
With VDI, apps stay in the data center — just like in the old days. The apps are platform agnostic and can be accessed from any device and OS, including your employees’ own devices and (possibly) your computers that are currently running XP. You’ll need a rock-solid BYOD policy if you go this route.  Depending on your situation you can either build a dedicated VDI solution or subscribe to a cloud-based solution.

6. Your network will become increasingly insecure if you continue to run XP
Microsoft reports that XP receives a third more malware than Windows 8 and is infected five times as often — despite the current support. So even though Microsoft will continue some anti-malware support* and Malicious Software Removal Tool (MSRT) updates through July 14, 2015, your network is more vulnerable running XP than running any other OS. Once Microsoft’s extended support ends, expect an XP malware feeding frenzy that will make the disruptions and headaches you’re already experiencing from the unsupported OS seem like tadpole play.

Some third parties are also continuing support for XP for now. Symantec will continue XP support until Microsoft ends its extended anti-malware support and Google will continue Chrome support until at least April 2015. Kaspersky is aggressively positioning its third-party solution to life after XP through its XP protection suites. But don’t let these extensions lull you into a status-quo slumber. The time to leap into action and out of XP is … yesterday!