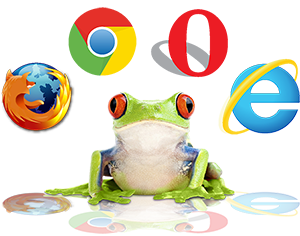 Chrome Wins! But Which Browser Is Really Best For You?

Did you know that more than 72% of browser users choose Google Chrome? That means you’re probably one of them. Microsoft is even scrapping its Edge browser and building a new one on Google’s open-source Chromium to try to catch up.

But did you know you have options that might serve you better? Here’s a browser comparison chart — which is really best for you?

What do you need your browser to do?

Speed, convenience, security, easy to use — you want your browser to make your internet life easier. You don’t want to think about it. You want it to save passwords, sync data, support extensions, and just plain work. All while using as little of your computer’s RAM as possible so it doesn’t slow you down, even when you have a ton of tabs open.

All leading browsers meet most but not all of those needs. The main differences have to do with security, privacy, RAM usage, and the little things that make people love them (or hate) them.

First, a word about speed

Also, some browsers will be faster on certain devices and websites. Firefox hasn’t tested well for speed on Macs, for example. And you’ll likely get some added speed benefits by using the browser built for the ecosystem you use the most, namely Chrome for G-Suite apps and Safari for Apple apps.

But compared to the speeds we had a decade ago, all are superfast.

Which is better overall?

Look at these comparisons to see which browser gives you what you want most. And who’s to say you should only use one? Having a second browser on board is always a good idea.

You have a couple of other options if anonymous browsing is important to you. You can use a Virtual Private Network, or VPN, along with your browser. It will automatically mask your location and IP address. You might pay a price in browser speed, however. And you might also pay a price in dollars. The best VPNs cost a few dollars a month.

Another option is a free browser built specifically for privacy called TOR. Tor has at least three layers of traffic encryption, masks your identity out of the box, and doesn’t track your browsing history. It also clears cookies each time you close the app.

Who will win the next browser war?

Remember Netscape? It lost the first browser war to Internet Explorer. Then came Safari, Opera and Firefox in the mid-2000s and the second browser war began. Chrome launched in 2008 and started gobbling up market share until it surpassed all the others in 2012 and officially won the war in 2017. Microsoft’s Edge barely made a dent in the market after its release in 2015, which explains its demise.

There’s no way to predict the future but it looks rosy for Chrome. It’s even working on a way to get rid of URLs — yes, you read that right — in an effort to protect against cybercrime.

PrevPreviousNeed IT Talent? When (and Why) To Look at Outsourcing
NextOutsourcing IT: Do You Need a VAR, an MSP Partner, or Something In Between?Next