COVID-19: Advice for working remotely, securely, and strategically: Stay productive and get ahead. 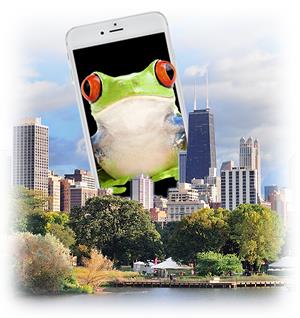 December 2014: Humongous! Ginormous! Super-sized! That’s how most people react when they first hold the new iPhone 6 or iPhone 6 Plus, two of the biggest smartphones ever released.

Is bigger better? Do you get more mileage out of more real estate? More done? Easier and faster? Yes! And no. Here are five pros and five cons — plus the reason it’s not likely smartphones will shrink back down anytime soon:

Phones are getting bigger for one simple reason — they’re used for apps more than they’re used for calls. And the research shows the bigger the phone, the more the app engagement. Why go to the computer when you’ve already got a ginormous phone in your hand?

Size does matter when it comes to smartphones — both ways! Bigger is:

*iOS Reachability Mode addresses this issue by bringing the top portion of the screen about halfway down when you double-touch the Home button.

How big is big, exactly?
Just how huge are the new iPhones compared to other smartphones? See Arstechnica’s smartphone panorama lineup (click the tiny + in the bottom right corner to expand) or compare them to your current phone by printing out these actual-size PDF templates. You’ll see that while the Apple 6 Plus is slightly bigger than the Samsung Galaxy Note 4, it’s actually isn’t the biggest phone (or phablet) around. The Nokia Lumia 1520, Huawei Ascend Mate7 and the aptly named Samsung Galaxy Mega are all bigger.

To get all of the exact specs in one place, check out Mobile Device Size. It’s an interactive database that includes dozens of phones, tablets and watches and lets you select your computer screen width for a more accurate actual size representation. It also shows you how each device compares in size to an AA battery, credit card, playing card and SD memory card — nice for the dimensionally challenged.

Watch for the next round of devices to be bigger as the app market continues to explode.