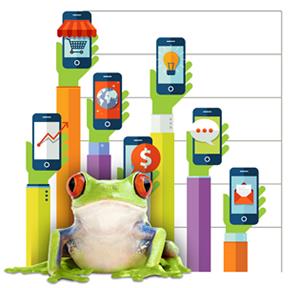 June 2014: Humans love their mobile devices! Not only are they the hottest trend on the planet, Cisco says by the end of this year they’ll outnumber people. We love them so much, in fact, 75 percent of us even take them to the bathroom.

While most Americans also have a desktop or laptop, in the developing world people are 100% mobile[LR1] , which account[LR2]  for most of the staggering growth. Hop on more amazing stats here:

4. Video accounts for over half of all mobile traffic and by 2018 it will be two-thirds. (Cisco)

5. Half a billion new mobile devices were connected last year, and 77 percent of them were smartphones. (Cisco)

6. iOS beats Android in the data traffic in North America and Western Europe, but not by much. (Cisco)

9. Sixty-five percent of Americans own a mobile device, up from 44 percent two years ago. (Nielsen)

11. Latinos lead the way when it comes to smartphone adoption and mobile video usage. (Nielsen)

12. Twenty-eight percent of the time a smartphone is being used, it’s for social media.

13. Nearly half of all smartphone owners use it to get on [LR4] social media every day. (Nielsen)

14. People love to use their mobile devices while watching TV — 84 percent do it. (Nielsen)

15. Forty percent of all searches are conducted while watching television. (iAcquire and Survey Monkey)

16. Seventy percent of mobile searches lead to action within one hour, three times higher than the rate for desktop searches. (iAcquire and Survey Monkey)

17. When a website is not mobile friendly, 40 percent of people leave and chose [LR5] an option that is. (iAcquire and Survey Monkey)

PrevPreviousDon’t Feed The Database! 5 Tricks to Help Protect Yourself From A Massive Data Breach
NextIt’s Like Having A Doctor In Your Pocket! Welcome To Apple’s New Health AppNext