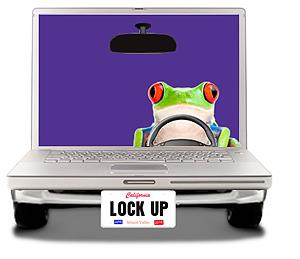 Don’t Be the Unlocked Car! 4 Easy Ways To Secure Your Cloud Files

August 2013: Picture your car in a huge, crowded parking lot. Most of the cars have unlocked doors and some even have open windows. But you, smart frog, lock your doors and roll up your windows. So when do-badders look around for stuff to steal, they choose what’s inside those unlocked cars, not yours!

It’s the same with cloud services. When you “lock up” files you keep in the cloud, your data is much safer. You don’t even need the Fort Knox treatment — you just need to be safer than the next car. It’s easy. Here’s how:

2. Encrypt your files yourself before you send them to the cloud. This is the surest bet for safe cloud storage because it makes your file totally unattractive to hackers. Ugly even. Programs like Microsoft Office, Adobe Acrobat and Apple iWorks have built-in features that allow you to encrypt individual files, and you can encrypt any type of file by using free encryption software. Try Sookasa to create an encrypted folder within Dropbox, or check out Boxcryptor, which works with Dropbox, Google Drive, SkyDrive and 15 other cloud providers. Syncing is automatic.

3. Protect your files while they’re hopping from place to place. Encrypting during transit is like putting your file in a protective tube as it travels the information superhighway. All the major file sharing services offer safe transit but it’s not always free. Google Drive uses HTTPS and Sugar Sync uses TLS for all accounts, and Dropbox uses SSL for advanced users. Hightail also uses 128-bit SSL encryption for pay subscribers.

4. Double lock your doors! Enabling two-step verification on your Dropbox account or your Google account is like adding a deadbolt to your front door. It’s a super-smart way to super-secure your files. Once you do it a few times, it will become habit and you won’t even notice the extra 10 seconds it takes.

PrevPreviousWho Owns What? 5 Steps to Protecting Your Company’s Intellectual Property
NextSpy Cams: How To Stop Your Smart TV and Baby Monitor From Spying on YouNext