Home » Tech-User Advice » Tech-User Tips » Spy Cams: How To Stop Your Smart TV and Baby Monitor From Spying on You 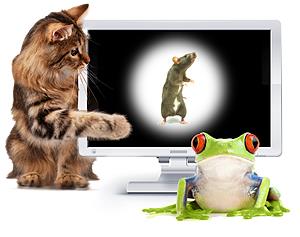 Spy Cams: How To Stop Your Smart TV and Baby Monitor From Spying on You

September 2013: When is a smart TV not so smart? When it can be used against you! Hackers can remotely turn on the camera and microphone embedded in some smart TVs without your knowing it, and then watch (and record) what you’re doing. The same goes for video baby monitors that transmit over the Internet.

Not ready for your surprise close-up? Thwart that potential spy cam! Here’s how:
Smart TVs come with all kinds of ways to integrate the web for browsing, streaming, accessing social media, playing games and more right from your TV. What it doesn’t come with is security!

Recently an information security firm demonstrated how easy it is to hack into Samsung Smart TVs, which was so alarming that it triggered a US Senator to ask manufacturers to do a better job protecting American consumers. Until they do, you need to be your own firewall.

Cover the camera!
Tape works fine. When you want to use the camera, take off the tape. Also unplug the TV when you’re not using it. And never, ever do your banking on a smart TV.

Peek-a-boo-hoo
You might take another look at your Internet baby monitor, too. In Texas, a hacker turned a Foscam wireless camera into a spy cam. The parents figured it out when they heard the hacker swearing at their two-year-old, “Wake up, Allyson, you little [expletive].” The parents said they had been using a firewall and passwords, but evidently the camera had a vulnerability which allowed the creepy intrusion. The manufacturer has since patched the firmware.

To protect baby’s privacy, choose a video monitor that transmits via closed-circuit radio waves rather than the Internet (like old-school baby monitors). While you won’t be able to keep an eye on baby from the other side of the world, you can still watch from another room. And anyone trying to hack in would have to be within a few hundred feet of your home. So rather than worrying about the whole world, you can just worry about your neighbors. Not perfect, but better.

While hacking into baby monitors is new, taking over someone else’s PC is not. It’s called ratting and has been around for more than a decade.

What’s in line to be the next intrusion?

Place your bets on smart home systems. They can control your entire personal pond via the Internet, including locks, lights, thermostats and security cameras – which will be just too tempting for hackers to ignore.