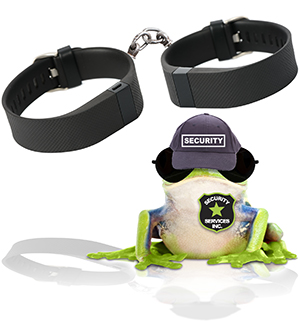 Your fitness tracker is your health buddy! It counts your steps. Reports your heartbeat. Helps you trim down and sleep better. It can even help doctors treat you in an emergency.

But did you know it can also help prove your case in court? Or (yikes!) be the best witness against you? Here’s how tracking your every move keeps you well-informed and can also inform insurance companies, cops, judges and whoever else accesses your data:

Court Cases: Insurance
The first time an activity tracker was used in court was in late 2014. A personal trainer was injured in an accident and to prove how little activity she currently gets as compared to before the injury, her lawyers are using her Fitbit data. Typically courts rely on testimony from humans for that kind of data — witnesses, medical experts, the person’s own claims — but not anymore. Now the data is quantifiable 24/7/365.

And this works both ways — for the insured and for the insurance companies. In the coming years, insurance cases will be one of the most common types to make use of tracker data. At some point, trackers may even be used to help determine health insurance premiums. If you get your 10,000 steps in, you’re probably healthier. Will the government use trackers in disability cases one day? Easy to see how it could.

Court Cases: Criminal
The government has already used Fitbit in one recent case. A woman in Florida said she was the victim of a home invasion and rape. But when the police got her Fitbit data, it turns out she had taken about 1,000 steps after she claimed to have gone to bed. Evidently those steps were taken to stage the fake crime scene. So the cops charged her with “false reports to law enforcement, false alarms to public safety, and tampering with evidence.”

Once again, a tracker made a great witness! It’s not hard to imagine how honest people will be happy to have their tracker data help make their case.

Court Cases: Against Fitbit
It appears Fitbit may not be the best witness, however, when it comes to recording your actual heartbeats. Which could be a problem if you have heart issues and are relying on it for accurate information. Fitbit users in Colorado, Wisconsin and California filed lawsuits against Fitbit claiming two of the models underestimate heart rate. A national class action suit is in the works as well. Another suit claims Fitbit overestimates sleep by 43-67 minutes per night and is therefore guilty of misleading advertising. Fitbit stands by its products and also says they’re “not intended to be scientific or medical devices.”

Court Cases: Can Google locations be used?
You don’t need to buy a Fitbit to track where you are — you have Google! With location services for Google activated on your smartphone, Google tracks everywhere your phone goes. And you can see its entire movement history on a map, filtered by year, month and day. Too creepy for you? You can turn off tracking and delete your location history or just parts of it. So far, no court cases have gotten media attention for using Google locations as evidence but if it hasn’t happened yet, it surely will.

The Case for Common Sense
Ready to track your every move? More than 20 million people already are. Check out activity trackers from Fitbit, Jawbone, Garmin, Basis, Mio, Misfit, TomTom and others — see brand and model comparisons on PCmag.com and wareable.com.

And remember these six things about activity tracker data, security and unintended consequences:
1.    Avoid public WiFi for transferring data.
2.    Don’t use fitness apps that aren’t fully vetted (be careful of lookalikes).
3.    Follow all the usual rules about passwords and use two-factor authentication if your tracker offers it (Fitbit does not).
4.    Keep in mind that if your tracker has GPS, it also knows how fast you drive.
5.    If you’re going to commit a crime — or stage one — take off your tracker first :).
6.    Deleting your data completely and forever isn’t that easy – it’s the Internet, after all .

Leapfrog is highly concerned about keeping your data secure. The number of people trying to figure out how to steal your data so they can profit from it is staggering. So when it comes to your most personal information — your health, your location, your habits —you need to be especially careful. Take the extra steps to not be an easy victim while you get healthy and have fun. To get an idea of what it’s like to jump into the lifelogging trend and track everything about yourself for 30 days, Max Knoblauch will give you a laugh.