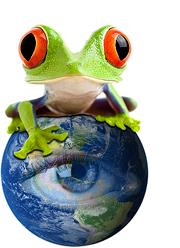 How many cyber attacks do YOU think are connected to organized crime? New cybercrime survey reveals startling stats.

If you’re like most people, chances are your guess about online organized crime is way off. The ins-and-outs of cybercrime are a mystery to most people. That’s one reason here at Leapfrog we’re constantly hopping around giving advice about protecting yourself. “If you take a few extra minutes on the front end,” we say, “you can save a boatload of hassle down the road!” How big a boatload? A new survey reveals it takes an average of four weeks to resolve a cybercrime, and that average includes nuisance crimes.

It reveals a lot of other interesting facts, too. Conducted by an independent market research firm called StrategyOne on behalf of Symantec, a provider of antivirus and spyware protection, the survey collected information from more than 7,000 adults in 14 countries. The results are compiled and can be downloaded in The Norton Cybercrime Report: The Human Impact:

Here are some of the eye-popping highlights:

1. Percent of adults in the US affected by some kind of cybercrime, which includes computer viruses or malware attacks: 73% (we rank #4, behind China at 83% and Brazil and India tied at 76%)

2. Percent who are concerned about cybercrime: 86%

3. Percent who think cybercrime won’t ever happen to them: 3%

4. Percent who say they would change their online behavior if they were to become a victim of cybercrime: 51% (nope, that’s not a typo …  half would keep doing the same thing anyway)

5. Percent who think organized crime is to blame for cyber attacks: 21%

6. Percent of cyber attacks that are in fact a direct result of organized crime: 90%

7. Percent who use their regular email address for making online purchases: 83%

8. Percent who use a debit card for making online purchases: 74%

9. Percent who have been a victim of social network profile hacking, online credit card fraud and sexual predation: 7% (for each crime)

10. Percent who don’t back up their hard drives regularly: 69%

Leapfrog estimates half of these crimes can be avoided by having anti-virus and anti-malware protection built into your firewall at work and home — simple as that. Yet most people actually feel powerless when it comes to protecting themselves. Furthermore, if they do get attacked they blame themselves and often don’t even report it.

On the flipside, many admit to behaving unethically themselves, especially when it comes to using and sharing other people’s media like photos and music downloads. But overall, 80% of frogs around the world respect our communal pond!

PrevPreviousWhat’s the difference between 32-bit and 64-bit and why should I care?
NextGoing tech sHOPPING for the holidays? Read this first!Next