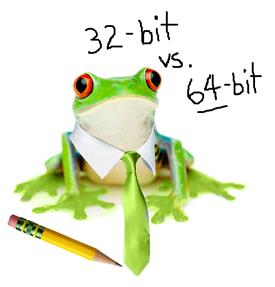 When you hear about 64-bit processors and the 64-bit operating systems that run on them, it sounds like something that’s twice as fast or big as a 32-bit. But it’s a lot more than that. A 64-bit system uses memory in a different way, and it’s the way of the future.

Soon, 64-bit operating systems will be the industry standard because, basically, they can handle huge amounts of RAM, which is what gives you computing power. A 32-bit system maxes out at 4 GB RAM but a 64-bit system can address about 16 billion GB of RAM. Yes, that’s billion. Which means there is essentially no ceiling to the computing power of a 64-bit system. Imagine the capabilities for graphics, not to mention for science.

Problem is, almost all of the software available today has been developed for 32-bit systems —the industry standard for 15 years — and will have to be re-written for 64-bit’s newer, faster architecture. This will take some time, but it’s definitely moving in that direction.

Newer Macs running the Snow Leopard operating system and its built-in applications already have 64-bit technology, as do some PCs. To find out which processor is in your PC and if you’re running a 32-bit or 64-bit version of Windows Vista or Windows 7, check out this FAQ. And if you’re shopping for a new PC, consider one with a 64-bit processor and operating system — the operating system is backward-compatible and ready to hop into the future of ultra-efficient computing with billions of GB of RAM.