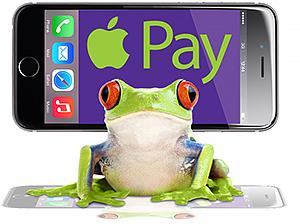 Apple Pay: 6 Reasons Tapping Your Phone At Checkout Is Safer Than Swiping Your Card

November 2014: Is it safe to pay for something by sending your credit card information to a checkout terminal straight from your smartphone? No swiping, no signature, no anything tangible?

You bet! Advanced encryption and security technologies make Apple Pay more secure than physical credit cards for you and the companies you buy stuff from. Here’s why:

You can use Apple Pay to check out from within retailers’ apps, too, provided the store has added a “Pay With Apple Pay” option to its checkout process.

Apple Pay is available on iPhone 6, iPhone 6 Plus, Apple Watch and the new iPads. It currently works with the top three credit cards — Visa, MasterCard and American Express — six major banks and dozens of retailers. More cards, banks and stores are coming on board soon. Here’s CNET’s complete list that will be updated regularly.

What if you don’t have an iPhone 6 or other shiny new Apple devices?

Apple Pay may be getting all of the attention but it wasn’t first out of the gate. Google Wallet was. Google Wallet also uses Near Field Communication (NFC) and NFC chip technology but the system has never really taken off. Since plenty of smartphones have NFC chips, including Samsung and Nokia phones, all this Apple Pay attention might actually give Google Wallet the boost it needed.

Another app payment system in the works is called CurrentC. It’s being developed jointly by some of the biggest retailers out there — Walmart, Best Buy, 7-Eleven and others — and should launch next year. Meantime, some CurrentC retailers like CVS and Rite Aid are disabling the NFC readers at their stores to keep their customers from using (and loving) Apple Pay. Plus, one of the most important things CurrentC retailers want is the ability to track your purchases and behavior, something Apple Pay prevents.

Whether you end up going with Apple Pay, Google Wallet, CurrentC or whatever other system leaps onto the scene, one thing is for sure. Any of these choices are safer than the antiquated pieces of plastic with magnetic strips that are currently in your wallet.

PrevPreviousShould Your Business Upgrade to Windows 10?
NextHow To Back Up Files That Only Exist In the CloudNext