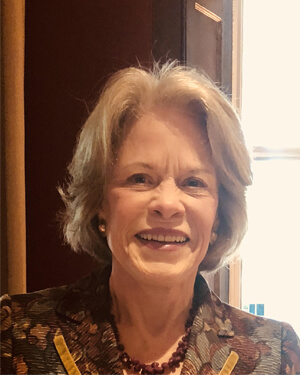 Claire Lewis Arnold co-founded Leapfrog in 1998 and serves as its CEO, bringing a wealth of experience in high-growth business development and long-range strategic planning to the Leapfrog team. She is passionate about enabling clients to securely fulfill their mission through highly serviced technology.

Prior to starting Leapfrog, Yum acquired, through a leveraged buy-out, a local distributor of consumer goods to convenience stores and mass merchandisers and spent the next 15 years building it into one of Georgia’s five largest privately held companies. As its CEO, she expanded the company from a traditional one-warehouse distributor into a multi-faceted corporation with nine operating divisions. Yum aggressively worked on behalf of her industry, serving on the board of its trade association and as its President and Chair.

Prior to this, she spent nearly 10 years with Coca-Cola USA, where she was the marketing manager for Coke’s first plastic beverage containers and also held positions in sales, sales management and long-range planning.

Yum serves on the Board of Trustees of EARTH University Foundation, Spelman College, and the Tull Foundation, as well as on the Governing Board of The Woodruff Arts Center, Emory’s Brain Health Center Advisory Council and is a member of the Atlanta Committee for Progress. Additionally, she Chairs the board of Achieve Atlanta and is Deputy Chair of The Federal Reserve Bank of Atlanta. Yum served for many years as a Trustee of Mary Baldwin College, for five years as its Chair, and as the Chair of the Board of The Georgia Conservancy and The Carter Center Board of Councilors. She’s past President and past Chair of the Rotary Club of Atlanta. Yum has served on a total of six NYSE – listed firms, as well as on the boards of Venture Atlanta, Leadership Atlanta, The Westminster Schools, The Shepherd Center, Children’s Healthcare of Atlanta Foundation and on the Board of Visitors of The Fuqua School at Duke University.

She has been active in Young Presidents’ Organization, Chief Executives’ Organization, The National Conference for Community and Justice, and The Committee of 200, and as a mentor to younger women in the Atlanta business community. She was named the 2002 Entrepreneur of the Year by the Metropolitan Atlanta Chamber of Commerce and the Atlanta Business Chronicle and received the 2004 Lettie Pate Whitehead Evans Award for outstanding performance as a corporate director. In 2006, Yum was inducted into the YWCA Academy of Women and in 2009 received the Rotary Club of Atlanta ‘s Armin Maier Community Service Award. She was named 2014 Most Admired CEO in the Technology Sector by The Atlanta Business Chronicle, received the 2014 Turknette Servant Leadership Character Award and was honored with the Girl Scouts of Greater Atlanta 2018 Changing the World Award.

Yum earned a Bachelor of Arts in Mathematics, as well as a Doctor of Humane Letters from Mary Baldwin College in Stanton, Virginia and has attended numerous programs at The Harvard School of Business. She enjoys spending as much time as possible in the mountains of North Carolina with family and friends.