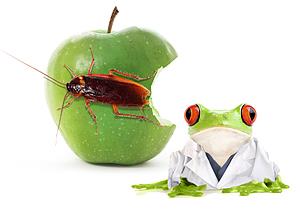 Apple Users: Did the Recent “Gotofail” Bug Put Your Data At Risk?

March 2014: If you’re an Apple user, hopefully you’ve heard about the recent major security problem affecting iPhones, iPads, Mac computers and other Apple devices and have already downloaded the patches (if not, we’ll tell you how).

But now that the immediate scare is over, should you be worried about what might have happened to your personal data while the security gate was open? Here’s what all Apple-using frogs need to know:

What, exactly, was the problem?
A line of code deep in the system had been allowing “man-in-the-middle” hackers to capture, hijack or modify information as it was being transferred between devices. Normal security processes that include “signature verification” and encryption of data while en route (called SSL and TLS) weren’t working properly because of the faulty code. Hackers could have also built fake websites that mimic legitimate websites — like your bank’s — and you and your devices would never have known the difference.

Which apps were affected?
Safari, Mail, Calendar, Twitter, iMessage, Facetime, Keynote, iBooks and others, including Apple’s own software update process.

What’s the likelihood that my accounts or personal information have been compromised?
Not very high. There haven’t been reports of major attacks and, despite some speculation, it’s very doubtful the NSA could have used this vulnerability to collect information because the collector would have to be in WiFi distance from your computer. But the coffee-shop hacker is not a conspiracy theory — it’s real. Make sure to update your devices (see below) because you, smart frog, know that hackers jumped all over this vulnerability the moment the news broke.

Has the problem been fixed?
Yes. Here is the Apple Security Update page. See below for update instructions.

How long had it been a problem?
Reports conflict. Some say 18 months; others say just a few months. When it comes to OS X, only 10.9 and 10.9.1 (Mavericks) were affected. Details are still unclear about how the bug was discovered.

How do I test my Mac to see if it’s safe?

Go to the gotofail.com test site while using Safari. If you see this message, hop on that update! 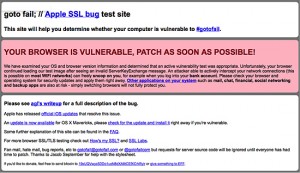 Why is it called “Gotofail”?
Because the whole problem revolved around a single “goto” command in the code.

What should I do if something like this happens again?
It depends on the bug but in general always take these precautions:

How do I update my devices?
As with all operating system updates, make sure to back up your device first!

PrevPreviousHow Phishing Emails Led To Target’s Massive Breach: 5 Steps Your Company Should Take Now
Next9 Apps That Feed Your Need For Speed — Speed Reading, Check Splitting and Office for iPadNext