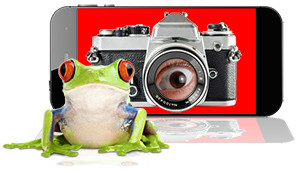 April 2017: Don’t be paranoid — chances are slim you’re being watched through a camera on your phone, computer, TV or baby monitor. But you certainly could be! Cameras connected to the internet are part of the worldwide web of wired and wireless networks.

The fact that you can livestream your vacation and monitor your home security system from the device in your pocket also means uninvited viewers can find their way into your pocket, too. So while being paranoid is not good, being smart is! Here’s what you need to know:

Kidding aside, some of the best hacking experts in the world work for the U.S. government. Since the WikiLeaks CIA document dump last month, the whole world now knows how the CIA goes about doing its hacking, including how it has exploited Samsung Smart TVs by using a fake off mode. While keeping in mind the part about not getting paranoid, if the CIA can figure out a way to hack your TV, so can the bad guys. Especially now, courtesy of WikiLeaks.

Devices that can potentially spy on you through built-in cameras and microphones:

Device cameras can be turned on by an app or device without you knowing it. If you also have location services running on your mobile device, the camera can be turned on remotely when the phone is at a specific place. The good news is you can control access to your device’s camera and microphone through the settings. The device itself isn’t smart — it does what it’s told. So you can be the smart one by telling it to do the right things.

When you should deny access to cameras and microphones:

For apps, say no more than yes. Deny access:

Also, remove apps you don’t use often. They are a security risk. They take up space, need to be constantly updated, and you probably have more of them on your phone and computer than you think. If you find you need an app again, you can always download the latest version. Most people don’t use 90% of the apps installed on their devices and computers.

For computers, be like Mark. Mark Zuckerburg — and F.B.I. Director James Comey and nearly every attendee at a security conference — puts tape over his laptop camera and microphone jack. It’s cheap and easy to remove. It’s not going to hurt and it could certainly help. Use tape that matches your computer if you’re paranoid about looking paranoid.

Leapfrog Services believes that a little bit of paranoia can go a long way to protect your privacy and information. You shouldn’t be constantly worried but you should be aware that low-hanging fruit gets picked first, so don’t have low-hanging fruit! Get rid of some by denying access to cameras when access isn’t necessary. It’s the same with business. Securing your network starts with making it harder to get into than the next company’s.

If your goal is an optimized IT environment that helps your company grow and prosper, you need highly effective Help Desk support. The faster problems get solved, the sooner your team can get back to work. Leapfrog offers a range of managed IT services, including 24/7/365 Help Desk Support. We pride ourselves in our lightning-fast resolution speeds and deep knowledge of all things IT. Customer service as Priority One means no more bottlenecks!

PrevPrevious7 Things You Can Do With Internet That’s 100 Times Faster
NextHigh Stakes IT: Why Your Company Needs An IT Trusted Advisor Now More Than EverNext