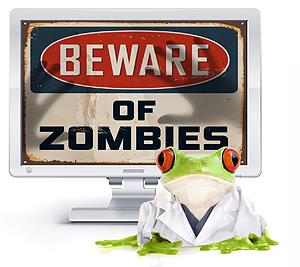 Malware Botnets: Is Your Computer Part Of A Secret Zombie Army? (Seriously.)

January 2014: Is a nasty piece of malware hiding inside your computer, waiting for instructions to turn itself on and suck up your personal information? Hopping horror!

Recently nearly two million login credentials for more than 93,000 websites, including Facebook, Gmail, YouTube, Yahoo!  Twitter and ADP, were stolen by “zombies.” Here’s how to find out if your computer is part of this “zombie army” and what you can do about it:

What’s a zombie army?
It’s the same thing as a malware botnet, or robot-network of hijacked computers, that’s being controlled remotely by someone else. The malware initially gets onto your computer through spam or malicious websites, then sits there doing nothing until it’s commanded to wake up via an Internet command. Then it connects with the same malware that’s hiding in other computers and runs secretly in the background, effectively creating a zombie army that does its dirty work. Keep in mind that most web traffic, however, is harmless bot traffic so don’t let the word “bot” worry you. Most bots simply crawl websites to index content for search engines and to collect information for analytics.

How do I know if my computer is part of a zombie army?
Look for the telltale signs of malware — like slow or erratic functioning — or big Internet bills. Unprotected computers are at risk for being turned into zombies, and cyber security experts consider it among the most dangerous and fastest growing forms of malware. Many companies affected by the recent massive breach have notified the owners of the compromised accounts that their usernames and passwords have been stolen.

What does a zombie army do?
Usually it sends spam — LOTS of spam — or it carries out money-making schemes. Common schemes are Distributed Denial of Service (DDoS) attacks that overload competitors’ systems, generating fake clicks to inflate pay-per-click revenue and mining for bitcoin, the virtual currency.

How many computers are in a zombie army?
Hundreds, thousands or possibly millions. Each army is different. Symantec, a cyber security firm, is currently working to dismantle the zombie army called ZeroAccess, which has 1.9 million zombie computers. Mobile devices can be zombies, too, having been infected through email, text messages or fake Google Play stores.

If my computer is a zombie, how do I kill the zombie part?
Update all of your antivirus software and browsers right now. They should find and pulverize the zombie to smithereens. You can also contact your IT professional.

How do I protect my computer from becoming a zombie?
Do these five things every day:

Also check out this Kaspersky infographic, How To Prevent Your Computer From Becoming a Zombie, and Microsoft’s suggestions.