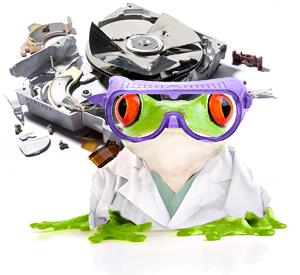 Ready for a New Computer? How To Wipe Your Old Hard Drive

OCTOBER 2012:  Hooray, you have a new computer! But now comes the flip side: getting your information off the old one. Just deleting the files won’t work because when you delete a file, the information is really still there, just waiting to be overwritten by other files.

So regardless of whether you’ll sell your old computer, donate it, give it to another frog or take it to a recycling center, you need to wipe the hard drive completely clean — or physically destroy it — so cyber crooks don’t get their hands on your precious 1s and 0s. Here’s how, for PCs and Macs.

To wipe it clean, use utility software designed to remove all traces of data so it’s impossible to recover, even for someone who knows what they’re doing.

Two of the most popular are CClear for PCs and Macs and DBAN for PCs. Both are free. And both can take a really, really long time to do the job, depending on the size of your hard drive. So make sure your computer is plugged in and then go for a leisurely hop (or 10) around the neighborhood or turn in for the night.

Another popular option for PCs is WipeDrive (currently selling for $19.95) and its sister, WipeDrive SystemSaver ($39.95). The latter wipes your files but retains your Windows operating system (Windows, XP, Vista and 7).

If you have a newer computer with a solid state drive (SSD) instead of a hard drive (HD), cleaning it is a different story. SSDs are found in Ultrabooks, netbooks, some Macs (like MacBook Air) and other slim laptops because they’re smaller. Usually data is effectively deleted when you delete a file. However, to be extra secure, try SecureErase for PCs (free) and use Apple’s built-in FileVault 2.

A second and far more dramatic option is to remove the hard drive … and then physically destroy it. The IRS uses an awesome word: pulverize!

Smash it with a hammer, drill holes through it with your power drill, melt it with a blow torch (excellent for SSDs) or use any other destructive device that will render the disks incapable of spinning or ever functioning again. But be careful if you burn it because toxic chemicals may be released, and always wear goggles to protect your froggy eyes!

And while you’re at it, why not make a video of your drive-destroying adventure and post it on YouTube with all the others?

PrevPrevious3 Factor Authentication: Why You Need It To Protect Your Business
NextEver Seen A Flashmob of Giving? How Tech Is Powering A One-Day BlitzNext