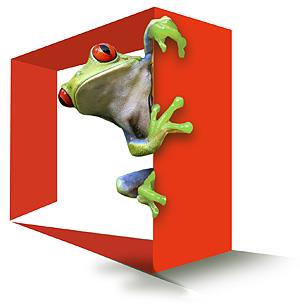 MARCH 2013: If you’ve been waiting for the latest and greatest Office product from Microsoft, wait no more. Office 2013 is here! And, more importantly, it’s up there — in the cloud!

Microsoft has hopped up to the cloud permanently by offering its full Office suite as an online, cloud-based service. Other updates include a Windows 8 minimalist appearance, touch-screen functionality, new collaboration options, rich formatting tools and improvements like the ability to edit PDFs in Word.

What else is different? And how much does it cost? Check out our answers to these and other key questions you’ll have about making the leap into Office 2013:

The biggest differences in Office 2013 are the cloud integration, delivery model options and Windows 8 touch interface. The entire Office interface is simpler, there are new start pages, apps have been tweaked and the Ribbon is improved, but it’s not a complete overhaul. Gone, however, are removable media copies and multi-copy discounts, along with your ability to reinstall Office 2013 software if something happens to your computer (there’s a lot of push back on this).

You have four pricing options. The annual subscription/cloud option, called Office 365 Home Premium, costs $99.99 and includes the 2013 versions of Word, Excel, PowerPoint, Outlook, OneNote and Publisher for five devices (mix of computers and handhelds, PCs and Macs). You also get 20GB storage in SkyDrive (Microsoft’s cloud storage) and 60 Skype minutes.

The download-only options will run you $140 for Office Home and Student 2013 that includes Word, Excel, PowerPoint and OneNote. Office Home and Business 2013 adds Outlook to the suite for a cost of $220, and Office 2013 Professional adds Publisher and Access for a total of $400. All three of these suite versions can be installed on only one PC and do not include updates. Sorry, Mac users, but there won’t be a 2013 non-cloud version for you until 2014. Clearly Microsoft wants everyone, regardless of operating system, to hop up to the Office 365 in the cloud. (Note: Office 365 began as a business tool but has evolved to include this home use offering.)

If you’re running Windows 8 on a tablet, the answer is probably yes, it’s what you’ve been waiting for. If not, some reputable reviewers weigh in. CNET offers a deep review and recommends you get it. So does Mashable, while PC World says it depends on your needs. CNN Money and Ars Technica say don’t bother. Make sure to read up on licensing issues before deciding which version to go with.

4) Will it work on my operating system?

5) How does it compare to the competition?