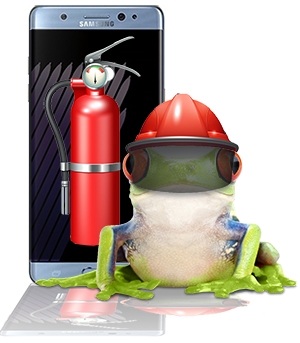 Galaxys and BlackBerrys: Firing Up Phones In Totally Different Ways

Here’s how Galaxy Note 7 launched and crashed within weeks, smartphone models you can consider instead, and how BlackBerry’s pivot to software can impact your day-to-day productivity:

A quick recap of the Galaxy Note 7 debacle
The Galaxy Note 7 went from breaking presale records to pariah status in less than two months. Samsung — which has about 23% of worldwide smartphone sales, making it the market leader — released the Galaxy Note 7 on August 19. After 35 phone batteries had caught fire, Samsung began replacing the original phones on September 10. On October 5 the replacement phones started catching fire, too — the first one lit up on a plane. Fortunately, the plane was on the ground so it was evacuated safely. By October 11 Samsung had stopped selling and making the phones altogether.

If you still have a Galaxy Note 7, the Department of Transportation considers it a ticking time bomb (AKA a forbidden hazardous material under the Federal Hazardous Material Regulations) and won’t allow one on any plane. So you need to get rid of it.

Consider these smartphones instead
Even though the smartphone market is consumer-driven, if you use your phone for business you can choose from more smartphone models than you can shake your charging cord at. See these posts from Business Insider, Techworld and Business News Daily to help you decide.

BlackBerry’s five phones are among the best choices because they are the most secure, are supported by enterprise-level businesses and can be managed by IT departments. You can feel confident the phones will still be around for a while … but they won’t be built by BlackBerry.

BlackBerry may streamline your smartphone life even when you choose a different brand
BlackBerry is on fire right now, too, but in a good way. The company recently stopped designing phones altogether and instead is focusing on becoming the go-to for software that secures and manages mobility for business. Last year it bought Good Technology, a competitor in the mobile security space, and it previously bought AdHoc, WatchDog and SecuSmart, all mobile security-related companies.

BlackBerry phones will be manufactured by its partners — about 80% of the phone parts had been made by partners anyway. Currently there are 23 million worldwide BlackBerry users, down from the high of 85 million users in 2013.

With BlackBerry offering ways for businesses to improve BYOD (Bring Your Own Device) by securing it, end users win, too. More secure phone technology means less risk to your company and more time for you to get things done instead of thinking about how to do things securely.

Leapfrog works with mobile devices in the same way we work with other IT devices — we support them. It can get pretty complicated. That’s why we help our clients develop mobile device strategies that balance productivity and security through a streamlined, centralized approach. Your team can use their favorite BYOD phones — BlackBerry, Apple, Samsung, Motorola, HTC, and other. But not the Samsung Galaxy Note 7!

PrevPreviousTransform Your SSAE 16 Audits From a Pain Into a Breeze
NextiOS 10 and 10.1: What’s New, What’s Improved and How To Fix the BugsNext